It has been months since I have written a post solely about Brooks. Well, he’s a big six month year old now and I’m still grasping my head around that. There’s such a HUGE difference between ages of 3-6 months. So many new developments have occurred and he’s beginning to really show some character traits of his own. Needless to say, he’s 100% keeping me on my toes already and I know this is just the start. Let me back track a bit and run down what has changed over the past months.

When Brooks turned 3 months, that was when we officially said goodbye to the bassinet in our room and started sleep training him in his own crib. We didn’t take any classes on how to master this, we just did our own research and figured out what works for Brooks and ourselves. What we started before just throwing him in there at night was making sure ALL of his day naps were inside the crib. For the first 3 months I didn’t work, so it was easy for me to make sure he was on a strict schedule to make this transition as easy as possible. Once he “mastered” that concept we did his “night nap” (6-9ish) in his crib so he got the concept of sleeping in the dark in there. Then we would feed him that last bottle at 9pm and he would sleep in the bassinet beside us. That routine lasted about 2 weeks, then we officially threw him to the wild! Haha. He honestly transitioned sooo well, we were so impressed and knew we were lucky. I know sleep training can be HARD.

Nothing huge happened during his 4 month phase. That was actually the best month ever. He slept basically every night from 9-7:30am! It was amazing to say the least. He celebrated his first Thanksgiving! He was still way too little to understand what was going on, and obviously wasn’t able to enjoy the food. Matt and I did leave him for the first time though. We celebrated our one year back in NYC, and Brooks had his first weekend at Grandmas! With tons of FaceTime calls and updates, he did great and so did we. Even though we spent our trip mainly talking about him and looking through pictures haha.

In December he turned 5 months, and that was a big one. So much was already going on with both Matt and I’s birthdays, and then there was Christmas too. So from holiday parties, birthday celebrations, Christmas parades, and more, he got through it! We took him to Big Bear and San Diego for the first time. With each trip, we learned how to pack more efficiently. Alsooo, TEETHING had officially begun. We didn’t know at first because, hi we’re new at this. We just thought he discovered his hands haha. He was constantly biting his hands, nothing but his hands though. Then drooling started getting more excessive, and we could feel the bottom teeth in there. Over my birthday trip in San Diego was when the tooth had officially began to pop out. On January 2nd, the bottom tooth made its appearance and just a few days after popped the other front bottom tooth. He was a really good teether, not much ever bothered him. We had maybe a couple nights of screaming from irritation, but that’s about it.

And lastly, ringing in 2020 with this boy was amazing. I mentioned before that we took Brooks to San Diego for my bday, which is NYE! So we did a beach setup at Hotel Coronado where there was an entire setup going on to watch movies and the ball drop on the beach. We decided this is totally going to become a tradition, it was so much fun. This month was definitely recovery month for us all after the crazy holidays. We ALL got sick at different times, and it was so sad for Brooks. It was his first time being really sick, so of course long nights with him were expected. We fought it off pretty good, and lasted about a week. Teething is still stronger than ever with the top teeth now starting to come. Ever since teething began, his sleeping schedule is SO FAR OFF. I’m praying it goes back to normal soon because I’m not good without sleep. At one point it was like nursing all over again: midnight, 2am, 4am, 6am. We were so tired, we got in the habit of bringing him back in bed and we could tell he got used to it. Matt and I knew we had to cut that ASAP so willpower baby haha. No more falling asleep with Brooks in bed, only in his room on the chair and setting him back in the crib. It’s so crazy how he picks up patterns SO FAST!

A few more new things for his six month is solid foods and baths in the tub! With his teeth out, we were ready to officially start feeding him on a daily basis with solids. We actually began introducing him to it in December but not consistently. It was more to show him how to use a spoon and one food every week to see what he was allergic too. After passing the food tests, as signed up for Yumi. We get unique baby foods delivered to us on a weekly basis for Brooks. I love the variety they send, and so does Brooks! Definitely check them out. He also is now eating the teething wafers and holds it himself and just goes to town on those things. I’m so weird but I LOVE watching him eat those. It’s such a big step to watch him physically feed himself. Then for baths, we got this awesome bathtub seat for him from my baby shower and he loooves it. I threw him and Ashlyn together in the tub for the first time and he was so amused. Bath time is officially my favorite now. I just watch them play together in the tub, it’s so cute.

That is our update!! I think I forgot to mention he’s scooting now and getting on all fours, so crawling is definitely around the corner. I will say, for a premie baby, who is really only four months, he’s impressive. The doctor said he shows no signs of being a premie and is advanced right now! Which is so awesome, I love to hear that. Brooks is a little ham, and he’s growing so so so much right now and his developmental stages are happening so fast. I’m definitely kept on my toes more than ever with him now, but it’s also getting so much more fun. He’s learning what he likes and doesn’t like, and we can tell. I could eat him up, and all I want to do is kiss on his chubby cheeks. The next move is swimming lessons!! Can’t wait for that. Until next time everyone! 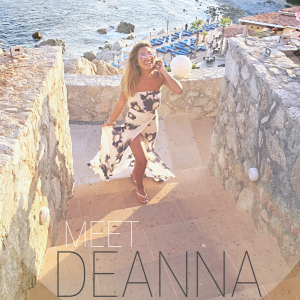 As neutral as it gets. 🤍
The real question is, how much money have you spent on pumpkins this year? Cause my Trader Joe’s receipts have doubled everytime I’ve gone 😂
Got me some cute pumpkins! 🎃
From flannels to shackets just like that. Use DEANNA25 to snag this cutie from @ottercreekshop
The blazer is having a moment. ⚡️
Wore this a couple days ago. Now back in jeans and a sweater. But pretty sure I’ll be back in a dress in a couple days… California Fall for ya! 😂